Contribution/ Originality:This study is one of very few studies that investigated the importance of extra linguistic factors such as attitude in learning second language. This research is still new in academic study of language learning. With this research, it could help teachers, students, parents and those who are involved in learning languages.

Language and communication skills are given heavy emphasis in Malaysian education system especially in public universities. Foreign students who study in public universities are also not exempted from this policy. They need to master Malay Language as it is a must-pass subject. This is because Malay Language is the official language and main medium of instruction in Malaysia.

Ability to master a variety of languages is an important factor in realizing the country’s aim towards globalization especially in academics in order to achieve world class education. To better our life and to build a developed nation, we must be able to understand foreign languages. Multilingual skill can produce skillful generation in mastering a few of international languages. International language teaching a also contributes in making national education goals a success (Education Act, 1996).

Ministry of Education Malaysia has introduced a few major international languages in residential schools and now it has been expanded to daily schools to achieve this goal. Arabic, French, German, Japanese and Mandarin are the international languages introduce to schools (Curriculum Development Centre, 2006). Based on the current scenario, the researcher has taken the initiative to identify extra linguistic factor that is attitude in learning Malay Language as second language.

Extra linguistic refers to language situations outside of linguistic environment, but in language learning, extra linguistic element is still taken into account as it gives information about motivation, emotion, attitude, personality and others, which has been proven to help a student to master a certain language (Schmidt, 2010). In this study, it is predicted that students; attitude is going to influence the second language learning among the foreign students in five universities in Malaysia.

Attitude factor is the second language extra-linguistic variable in Monitor Theory which has relation with filter function. Filter is said to be responsible in determining when the effort to master stops, that is either the second language learner has positive or negative attitude.

Attitude towards a language is the reflection of a person’s feelings for his own mother tongue or other people’s language (Crystal, 1991). The type of attitude plays an important role when someone is learning a language. Basic of attitude is divided into instrumental and integrative. If someone learns a language to get to know a race and its culture, it is called integrative. According to Ellis (1991) the desire to learn a language without being part of its race or certain propose is called instrumental.

The research findings concluded that majority of the students have high interest in Arabic Language but they did not show parallel attitude with their major and interest. The research found that less than half of the respondents like to read newspapers, novels, short stories in Arabic or access Arabic information through internet.

Other than that, they lack of interaction with Arab students and lack in using Arabic in their daily communication. This shows that the Arabic language culture usage among them is still at the minimum level due to some negative attitudes such as embarrass to speak, low self esteem, not confident, afraid of making mistakes and fear of being ridiculed by their friends. These attitudes are the obstacles that stop them from practicing Arabic language in their daily life. 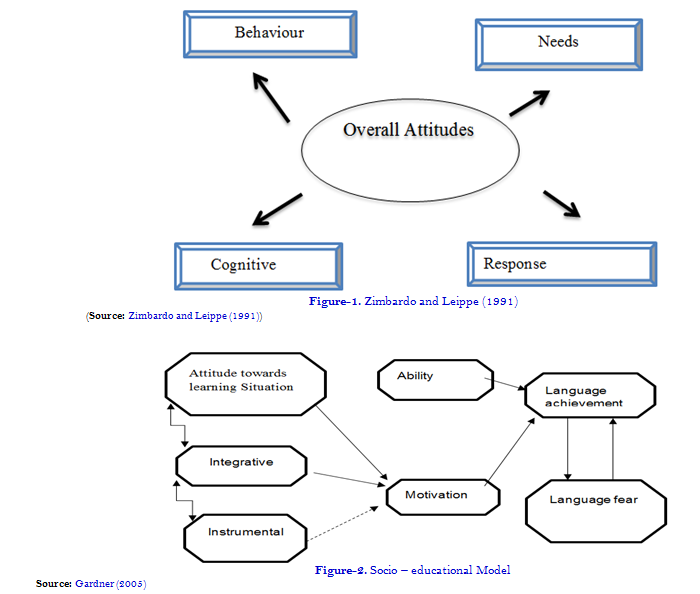 This model emphasises that learning second language is different from learning other subjects such as Mathematics, History and Geography because it involves other society’s cultural characteristics (Gardner, 2005). Therefore, a person’s achievement in language learning is influenced by his attitude and perception towards other language’s community. This model describes that the perspective on the importance of learning a language, skills gained and the role of individual differences can influence an individual’s second language acquisition. As an example, if cultural aspect is deemed as the most difficult aspect in learning the second language, the language acquisition will be low (Gardner, 1978).

A language acquisition level is related to individual’s differences such as intelligence, inclination, motivation and/or fear. On the other hand, language acquisition level is going to be high when its importance is known and many individuals are learning the second language. Therefore, the achievement is more related to intelligence and inclination rather than other variables.

Socio-Education Model (Figure 2) shows that an individual’s motivation to learn the second language has relation with two groups of variables. One of them is the attitude towards the learning situations. It is very clear that learning situations influence students’ motivation. Passionate teachers, skilled in second language, dedicated, interesting curriculum, carefully planned lesson plan and meaningful procedure assessment will increase students’ motivations to a higher level.

One more factor in second language acquisition is instrumental orientation. In many situations, someone would like to learn a certain language due to some practical reasons. If this concept is linked to acquisition, it is called motivation. From related opinions from previous researchers, Gardner (2005) was able to produce a test called The Attitude Motivation Test Battery (AMTB). AMTB was developed to manage a variety of socio-education components in second language acquisition. There are two sub-tests; a test with 10 items and a sub-test with four items. The designed concept variables are listed as follows:

Refers to affective reactions to any aspects in class and can be assessed based on classroom climate, the quality of learning materials, material availability, curriculum, teachers and others. In AMTB, these aspects are evaluated through opinions given by participants on teachers and the course.

Assessed through a variety of ways and represent the affective reaction of a group. Integration involves an individual’s orientation towards language learning, which is focused on communication with different group members. This matter also covers interest toward foreign language groups, as well as attitude towards targeted language. This concept includes tolerance towards other cultures. An individual who has high integrations values will not only focus on his language community and race. He will be open to accept language group’s characteristics which are different from his.

Motivation have multitude of aspects. The basic of motivation is identified through three things. Effort evaluation, persistence and inclination to learn the language. In socio-education model, attitude towards a learning situation as well as integration are main pillars of motivation. The same goes with instrumental as well as learning motivation and personality characteristics. Nevertheless, these factors do not give big impact to motivation.

The objectives of the research study are as follows:

2. To analyze the most dominant factor in the instrumental and integrative attitudes based on the studied foreign students.

This study is a quantitative study in the form of observation where data is collected through questionnaire instrument. Data collected is used to identify the factors influencing the foreign students’ attitude in learning Malay Language and analyze the most dominant factor in instrumental and integrative attitudes based on the same students. The respondents of the study consist of 150 foreign students who study Malay Language in UPM, UM, UKM, UTM and USM. The respondents come from various countries and have different education background. The questionnaire used is divided into three parts where Section A is about the respondents’ background, Section B is about students’ attitude towards Malay Language learning which contains 5 questions and Section C is about students’ motivations towards Malay Language that contains 15 questions. The study scope focuses only on the most dominant attitude of the students in Malay Language learning in five universities in Malaysia.

The research has chosen 5 items to be answered by the foreign students from UPM, UM, UKM, UTM dan USM. The attitude towards language test by Zimbardo and Leippe (1991) was applied by the researcher to find factors that influence the overall attitude of a student in the language learnt. Then, the research presented the questionnaire findings on the attitude of the students towards the second language. The analysis was presented according to the questions listed below. The distribution of attitude based on percentage is shown in a form of pie chart below:

From the findings, it can be concluded that students the importance and advantage of a person who learns L2. Most of the students said that they work hard in their L2 learning and always find opportunities to speak with the native speaker of the language. About 122 foreign students which is 81.3% agreed with the statement while 28 students (18.7%) did not agree with the statement.

Table-2. Number of Students who will continue Malay Language for Career and Future

Positive attitude of the students towards L2 learning can be seen when they agreed with the statement saying that they will continue to learn L2 and use it for their career, future and social interaction. About 119 respondents which is 79.3% foreign students agreed with this statement compared to 31 respondents (20.7%) who disagreed.

Table-5. Number of students who said that Malay Language learning is useful and enjoyable

The researcher found that from attitude factor towards the language, students were aware of the advantage of learning L2. 133 students which is 88.7% foreign students agreed with teh statement saying that L2 is useful and enjoyable compared to 17 foreign students who disagreed that amounted to 11.3% students. According to Zimbardo and Leippe (1991) when one is positive towards L2 studied, he will believe that learning L2 is useful and enjoyable.