Contribution/ Originality:: This study is one of very few studies which have investigated the magnitude of interconnectedness index between food and beverage industry in each regency / city in East Java Province on labor aspect.

The essence of economic development is actually a process in an effort to empower the community and to increase its access to various aspects of development both political, economic, socio-cultural, defense and security. East Java Province is one of the provinces in Indonesia that has an important role in encouraging the acceleration of economic development in Indonesia. East Java Province in 2010-2015, has an average contribution of GRDP to the total national GDP of 14.4%. The number is the second highest contribution after DKI Jakarta Province.

The contribution of East Java Province is inseparable from the various policies and ease of regulations that have been given by the East Java provincial government, whether related to investment activities, infrastructure development, and trade for all business actors in East Java. East Java Province experiencing economic transformation from agricultural sector to industrial sector, so that East Java Province undergo industrialization.

When demand for a product from a particular sector increases, this sector needs to buy more goods from other sectors as input to generate additional output. This purchase will stimulate additional output which in turn will require further purchases from other sectors. Thus, we can trace these direct and indirect effects across all sectors of the economy using output, income, labor multiplier effects. In previous studies space-time models have been employed where spatial effects were captured in a restrictive way by first order autoregressive lags, see Elhorst (2001) and Beck and Gleditsch (2003). In addition, the important things that we have to know about interconnectedness analysis are : SAMs (and extended input-output models) and their connection to input-output data, structural decomposition analysis (SDA), multiplier decompositions, important coefficients, and international input-output models(Miller and Blair, 2009).

According to Kosfeld (2006) the calculation of spatial autocorrelation by Moran Index method can be done in two ways: 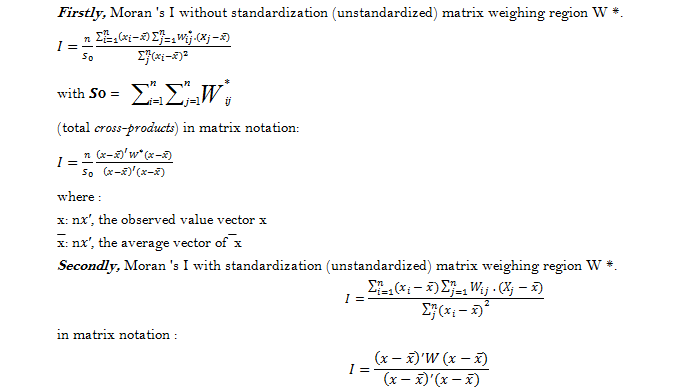 Reject H0 at the level of significance α if Z(I) > Z1-α with Z1-α is (1-α) a quintile of the standard normal distribution. Next, we will discuss about Moran Scatterplot. Moran Scatterplot is a used tool to see the relationship between standardized observation values and standardized neighboring mean values. When combined with the regression line then this can be used to determine the degree of compatibility and identify the outliers. Moran Scatterplot can be used to identify a spatial balance or influence . The types of spatial relationships can be seen from the following figure:

According to Zhukof (2010) the quadrants in Moran Scatterplot are as follows:

The Moran Index is one of the spatial analysis techniques that can be used to determine the existence of spatial autocorrelation between observation sites. The calculation of Moran Index with the input of labor data on food and beverage industry in 38 regencies / cities in East Java Province is done with GeoDa software can be seen in Graph below:

From the analysis of Moran Index done with GeoDa software obtained Moran Index value of 0.256. While Moran scatterplot is also presented in the picture above, the spreading points are :

As for the calculation of Moran index with input data of labor force in food and beverage sector in 2012, got as follows:

From the analysis of Moran Index done with Geo Da software obtained Moran Index value of 0.151. While Moran scatterplot is also presented in the picture above, the spreading points are:

From the various analyzes described above, it can be taken some conclusions as follows: